ONLY A RENEGADE WILL SURVIVE

Reckless, desperate, and distraught, Noa Sullivan leaps into a collapsing Portal in the explosive finale of Shattered Blue —the jaw dropping, award-winning first installment in The Light Trilogy—in wild hope of rescuing her little sister Sasha. Now Noa and the Fae brothers who love her—Callum and Judah Forsythe—must find a way to survive not only across worlds but between them, in places so treacherous and deceptive their own minds are twisted against them. As the three fight to survive their passage, they battle not only enemies but themselves, and their darkest, most difficult secrets. Surviving, however, is only the beginning: Noa needs to find Sasha. That means becoming a warrior herself, one just as fierce as the magical brothers battling for her love. Across broken cities, underground labyrinths, rushing floods and endless skies; in the face of legions of armies, horrifying tyrants, and the most deceitful of friends, can Mortal Noa rescue her sister—and understand her own heart—in time to escape the most deadly of magic realms? 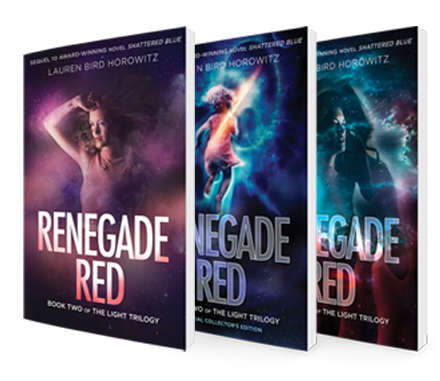